Sign of spectacular competitions are also grand prizes. The mere sight of them acts as trigger of D – Day memories even after several years. It remains an owner´s satisfaction which felt in moment when it rested on his chest. They are just medals we mean. And if you can imagine that just this one, for year 2016, would be the first or enrich your existing collection according to your liking, judge by yourself.

As usual, the medals for a peak of majorette season – World Championship Majorettes Sport 2016, are original. Graphic designer took inspiration from the Summer Olympic Games in Rio de Janeiro 2016. This major international event is incorporated into the face of the medals for this year. Rio de Janeiro, Brazil’s second largest city, it is inherently cradle of the finest, largest and most extravagant carnivals ever. Millions of visitors from around the world run away with Samba´s rhythm. A passion, vigor, elegance and beautiful costumes are common qualities of Samba and majorettes sport. 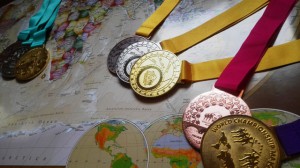 The reverse of the medal represents a logo of federation organizing this grandiose event. It signs internationality and collectivity and majorettes world whose future is mysterious, but shining like stars in the sky. Although this feature is desirable and clear, it is the centrepiece of the precious metal. Immediately below the logo glitters a date when the World Championship is held. Traditionally it is a part of the last week in August. And we can proudly say it is part of the loved Prague – heart of Europe.
• Hradčany – originally the town guarding the Prague Castle
• Nuselský most – bridge – one of the biggest bridges in the Czech Republic

These Prague symbols have stood out fo three years on medals and were engraved into a history of majorettes sport. This year they are revealing emotions which probably some of you knows very well .. You’re next! You feel the heartbeat, make a graceful entry, regular inhalation and exhalation, a slight fear and trembling. Majorette does not use to intimidated by herself, her adrenaline is flowing in veins, gaining an objective view of the outside world, her heart pounding and emotional flames of passion glow all around her. She just floating gracefully and taming her emotions , she is balanced, cheerful. Applause and crying.

Circle medal is lined with a chessboard, which represents the state crawling like a snake along the sea, it is a paradise of enthusiastic tourists. Part of the flag is the chessboard. It has historic overtones. Legend of the liberation of the kingdom caused a successful chess game. But the question is: “For whom?”

The obverse of the medal boasts of majorettes sport cornerstone. Harmonious, successful majorette is dressed in a pompous, elegant costume. She is divided by insignificant step with the dream worldliness. 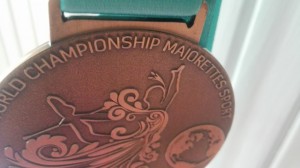 Visage of the medal is highlighted by vivid ribbon of cyan, which is a sign of youth, optimism and refined taste. The ribbon is threaded through a special ear, which is a subtle icing on the cake. Why it so special? Let’s See It.