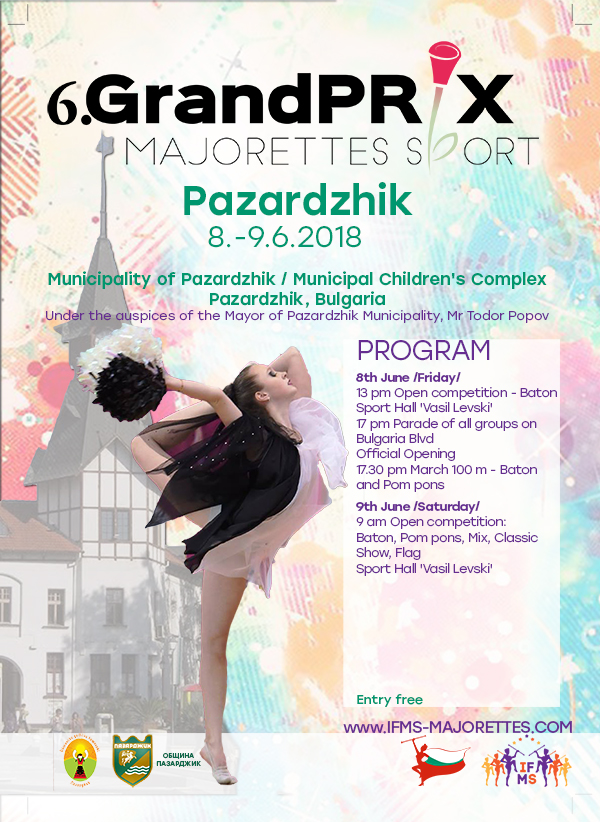 Pazardzhik, a town near Plovdiv (Bulgaria’s second largest city), was the host of VIth Grand Prix in Majorettes Sports (GP). The local organizer was the Municipal Children’s Complex. The competition was held in the days of the Sun Besparroza Festival, the Majorettes Festival. Practice has shown it to be a deliberate connection. While during the GPs competed higher performance classes formations, the festival belonged to everyone.

The competition was held in the sports hall Vasil Levski, named after the national hero, besides the marching parade, which was organized in the town center, in the street in front of the office building. The opening parade of the Majorettes with their colorful costumes and the number of competition groups was a nice trailer for the upcoming contest.

The jury was composed of Bulgarian and Czech judges. It has being evaluated according to IFMS rules. For the Czech judges, such a rating is a matter of course, while for the Bulgarian judges is such rating still a new one. The going through of the training course organized in the previous two years was a good investment, and Bulgarian judges are well on the way to become members of IFMS judges.

Competitors’ performances were different such the ones as in any other competition, but important is what individuals and whole groups will take from their performances comparisons and how they will work with acquired knowledge. The audience that watched the contest were appreciating by amazement and applause the performances they liked, regardless of whether it was an own competitor or a foreign one. The audience was making complete not just the competitive atmosphere, but especially in such instant way during the performance of the competition sets, they appreciated demanding and well-done elements, which is motivating for the competitors. The Czech expedition has admired by opponents the performances with the fringe (pom), especially with the senior members of the local group Mystery. The competition formations were awarded not only with medals, but also with the advancement to the European and World Championship. Formations that had already been awarded with the advancement from the national championships have only defended their nominations.

The organizers, as an accompanying program for the majorettes with a multi-day stay, organized a discotheque in the social hall of Hotel Forum. The Bulgarian Majorettes have mastered folk rhythms and convinced the knowledge of their culture in this area. The Czech girls learned in turn their step variations. The disco with its female participants was a great gift from the organizers and certainly contributed to the knowledge of the culture of the organizing country.

“The Forum hotel board was comfortable, we did not expect such comfort. The food was continental, tasted us more than in Croatia. The competition hall was good, we liked the big grandstand. The outdoor marching parade was nice, it was a change for us. The weather turned out well, the audience was gathering around the route and it had a different atmosphere than in the hall”, said the participants of the trip: Michaela Horska, Klara Szarovska, Eliška Fojtíkova

We would like to thank once again for all the clubs that have used the offer and have been part of the Czech GP representation in Bulgaria. The President of IFMS appreciated the demands of the trip and gave all the formations the opportunity to take part in the World Championships in Prague. Congratulations.