For the fifth time the contest belonged to the memory of the founder majorettes Sport (2001). While the first competitions were designed only for groups, now a small formations had multiple superiority, but the most had solos. This year was the most populated of all grades. On the start list there were recorded 31 stage groups, 8 parade march and 229 small formations. While in the previous year, when the competition was firstly included so that the starters could still fought for progress to multinational contest (ECH, WCH), was eliminated from two announced days to one day, this year two days would be perfect. Competition calendar is created in advance according preconditions of last years. After the previous experience were newly included to competition program a parade march and Golden 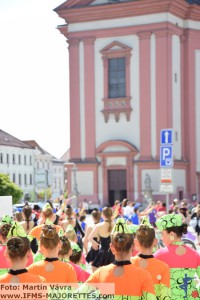 Two juries were assembled for the competition. Majorettes parade and majorettes performances were inspirational. The competition program was enriched by choice of Golden majorette. Competition went smoothly till announcing the results of junior block. A hall management needed to achieve to a contest end at 10pm because of Sunday´s important match in a hall. We weren´t informed about this fact before so that there was a misunderstanding. Lessor has presumed the end of competition until 10pm as in the previous year. Under the threat, that if the competition will not be shorter then is planned so he turn off the electric current in hall, we were forced to take precautions. It was decided that the competition will run without result announcement ceremony. All of contestants have started but were they were deprived of the happiness of the moment during ceremony. We are very sorry for that. Also it will not add the value to competition prestige. On the other side we have time for unfinished competition and granting approaches without contestation. Let we that to natural disasters, which can be a powerful storm that is able to destroy not only such competition.

Despite everything it was a beautiful event. Majorettes desire to compete in a big competition was fulfilled, dream of some of them to obtain an approach was also fulfilled and were put basis for “jumpers of contest” It is good that some contestants took this opportunity to their hands. It is necessary to define and improve this new element. In that case the practice experience is priceless experience. The effect is more open path for competitors to international contests.

Participants of morning parade march went back in time, when majorettes origin was in public amusement. It was fulfilled. A colorful parade, shimmering sequins on costumes and glitter wands of moving batons, band accompaniment, it was a fantastic experience.

In Hranice there was in 1994 elected the first ever Miss majorette Barbora Hubinská from Havířov. After 23 years was elected Golden Majorette Lenka Charvátová on the same place in the same city coming from the same city Havířov.

Now we are going to continue in established trends, deepen and refine them. If something went wrong from our side and not so as you wished, forgive us. We realize that substance have already been set by personality of Mr. Necid, is high. We want to hold it, but all of us are only human and we make a mistakes, although not intentionally. 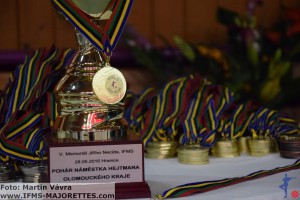 The competition was held under the auspices of the 1st Deputy President of the Olomouc region, Mr. Radovan Rašťák, who devolved on a Cup 1st Deputy President of the Olomouc region to the group with the highest number of points. The Cup was awarded to a group Merci from Záhorská Ves. The girls have competed with three choreographies. Mr. Radovan Rašťák was a member of the jury to select a Golden majorettes with a member of the council Mrs. Vlasta Zapatová and the wife of president IFMS Mrs. Jitka Doleželová. Tribute to decorate bronze, silver and gold majorette was awarded to the male part of the jury; mayor Mr. Jiří Kudláček and president of IFMS Mr. Josef Doležel. They collectively with Mr. Radovan Rašťák crowned the best majorettes by headbands, sashes and flowers. All contestants received a cosmetics package from Mrs. Eva Havranová and a gift from announcer of contest. It suited them much. Mrs. Jana Necidová and Mrs. Marie Krausová, founder of the club majorette in Hranice, refrained there almost till the evening. Both ladies also closely observed the performance and did not hide the admiration and joy of performances. We wish more such a majorettes grateful spectators!

Now the XI. annual European Championship in majorette sport is coming and also this contest is challenging for all organizers and competitors. Little time since the last competition, distance, language barriers, these are aspects that will not facilitate the preparation. On the other side the Adriatic sea is waiting for contestants and with good weather it will be certainly idyllic time spent on the beaches of the clear sea. We wish you a safe journey and good starts, voltage, good surprises, and primarily enjoy the competition without injuries, bad mood and feel the competitions as friendly event.