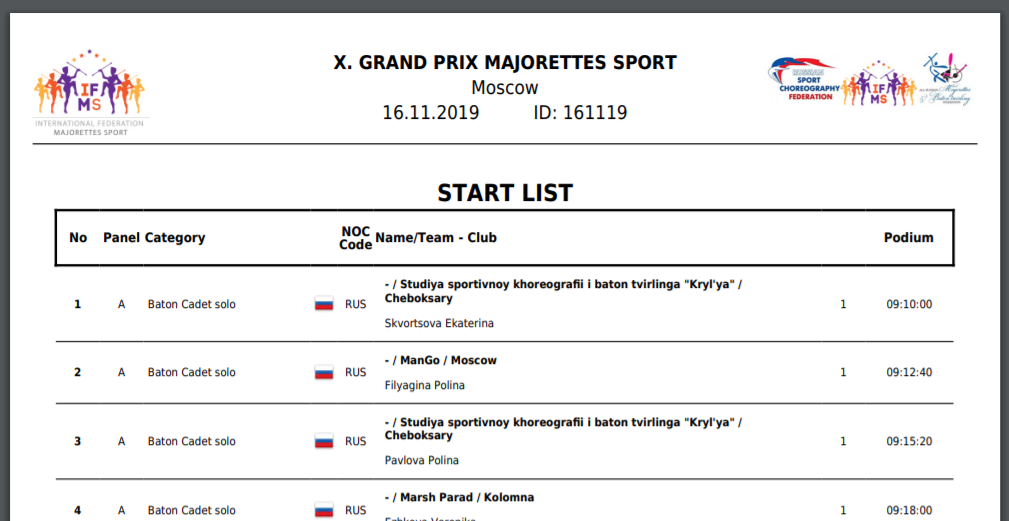 More than 200 formations are entered on the starting list of the majorette sport competition GP Moscow. In the CSKA Moscow sports hall, formations from Croatia, the Czech Republic, Kyrgyzstan, Poland and the Russia from different regions. The Russian Federation of Sports Choreographies is an experienced organizer, but the competition day will be challenging. The results will be processed in QScore (special applications for majorette sport), but will not be reported continuously for such high attendance. Intermediate results require more time, and this is impossible with such high attendance; the competition would be extended into the evening hours. The results will be announced during the day in at least two ceremonies, the first block is intended for small formations, the second group.

The competition is included in the IFMS calendar and is governed by its rules. According to the IFMS methodology, less occupied disciplines may be combined with a similar discipline. It is a competition and performance comparison, motivation for better results. The Grand Prix in Majorette Sport takes place in Moscow for the fourth time. According to the participation it can be assumed that it will be a competition with all attributes and will meet the expectations of both competitors and organizers.