In February, it held a annual meeting, where we accepted six new teams. 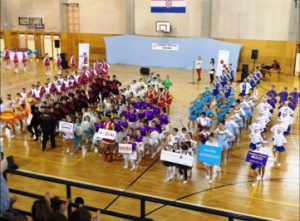 An arbitration commission attended a regular annual training of judges. HUMT received a reports about young judges (trainees) from the judges, who advised them and they acted like mentors. HUMT has 11 licensed judges and 3 trainee judges, who intern this season.

Within the school a seminar of Latin American dances was organized for beginner trainers and for advanced trainers.