ECH in Crikvenica for the third time

This year took down an increase of 60 formations compared to the previous year and reached the number 440. On the starting lists, competitors from Bulgaria, the Czech Republic, Poland, Russia, Slovakia and domestic from Croatia were registered. At the opening ceremony, the flags of the present states, the EU flag, as well as the ECH, HUMT and IFMS flags were carried. The competition was officially opened by Vlado Palac, the director of the competition. 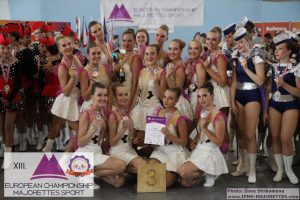 The program was put together in such a way that the results could be announced after each discipline. This was welcomed with enthusiasm by the contestants because they were more likely to enjoy a stay on the Adriatic Sea.

For the four competition days, the atmosphere was very friendly in the hall, the audience applauded good performances. The entire competition was running according to the timetable, without any problems, and did not meet any aspect that could negatively affect the competition.

The jury composed of judges from Croatia, Czech Republic and Russia evaluated the contestants, the main judge was Mrs. Monika Bergerova, CZ. In numbers, none of the judges had any dominance.

AMA Opava was the largest in the number of formations, and was deservedly awarded by the IFMS Cup for the support of the development of Majorettes Sport.

Program of the XIIIth year was enriched with collective photography with the IFMS inscription, the term of taking photos was taken on the second competition day in the morning, before the start of the cadets. Due to their age in the competition, cadets are always less represented, but with the support of majorettes competing in other days, the photography has become unique and interesting.

The final ceremony, as well as the official opening, was attended by V.I.P. guests, Mr. Damir Rukavina, Mayor of the city, declared the competition as finished.