More than 200 formations are entered on the starting list of the majorette sport competition GP Moscow. In the CSKA Moscow sports hall, formations from Croatia, the Czech Republic, Kyrgyzstan, Poland and the Russia from different regions. The Russian Federation of Sports Choreographies is an experienced organizer, but the competition day will be challenging. The results will be processed in QScore (special applications for majorette sport), but will not be reported continuously for such high attendance. Intermediate results require more time, and this is impossible with such high attendance; the competition would be extended into the evening hours. The results will be announced during the day in at least two ceremonies, the first block is intended for small formations, the second group.

The competition is included in the IFMS calendar and is governed by its rules. According to the IFMS methodology, less occupied disciplines may be combined with a similar discipline. It is a competition and performance comparison, motivation for better results. The Grand Prix in Majorette Sport takes place in Moscow for the fourth time. According to the participation it can be assumed that it will be a competition with all attributes and will meet the expectations of both competitors and organizers.

On Saturday, October26, 2019, a seminar for trainers and majorettes took place in the morning in the Sport Centre Bazeni Poljud in Split. I led the seminar together with my assistant Kristýna Daňková. I focused mainly on physical training, because Croatian majorettes have the biggest problem with this part. I pointed out the most common mistakes that occur most often and which they should work on. Coaches and girls were also interested in the correct presentation of gymnastic elements, while of course I pointed out the importance and correctness of working with the equipment pom pom.

On Saturday evening we discussed IFMS and HUMT rules together with coaches and referees. I answered their questions about the differences and our method of evaluation. Unfortunately, technology has not allowed us to evaluate the videos and show the most common mistakes on them.

Sunday 27.10. belonged to the competition V. Mediterranean Cup, where besides me evaluated national and international referees from Croatia, Montenegro and Slovenia. There were also teams participating in the competition from the mentioned countries. The Czech Republic was represented by Kristýna Daňková, who also participated in the Miss competition, which the organizers ranked for the time when points were counted and the results of the V. Mediterranean Cup were awaited. Kristyna ended out of 27 participants as 2nd vicemiss and so it was confirmed that the Czech Republic has beautiful girls.

The competition could be compared to our non-advancement competitions. However, it was apparent from the soloists who attended the Saturday morning seminar that they were paying more attention to the mistakes I pointed out. So I believe that with my little help I have contributed to the improvement of movement equipment in Croatia.

The World Championship was held under the auspices of the Ministry of Education, Youth and Sports and the Prague City Hall, which partially supported the competition.

Majorettes sport is a living, developing, popular with girls, but also with the public. It is most widespread in Europe, spreading in Asia, but also in Africa. Difficulty, higher goals and motivation are his trends. Good starts, sporting achievements, joy of movement, new friendships and spectator experiences were the attributes that accompanied the past competition days.

After the end of the competition season, there will be blocks of training, seminars, assets, and federation bodies will meet to apply the knowledge to modify and interpret the rules so that everything is ready for the next competition season.

The fourth day of the Seventh World Championship in majorette sport was the start of cadet girls and juniors with pom pom and discipline 2 baton category seniors. As in the previous two days, the morning and afternoon block ended with a ceremony of the announcement of results. At the end of day common composition of Hooray majorettes, which was made for the purpose of Richard Wagner, music editing and recording studio Kapron, Prague. Every day there is a live broadcast, you can watch it through www.ifms-majorettes.com, after the contest is complete record is published on the same pages and forms the documentation and archive of the contest.

Practical demonstrations of working with a wand

The Baton, one of the attributes of majorette sport, was the content of the accompanying program included in the World Championship days. Yonatan Orlov, a Canadian specialist, a student at the University of Winnipeg, was invited to demonstrate the elements of wand work.

On the program of the Seventh Majorette Sport World Championship there were formations with a wand, age categories of cadets. In the second block, the report mixes all ages.

At the beginning of the competition day, some of the conclusions of the General Meeting (21.08.) Were presented by the IFMS President.

The second day of the 7th Worls Championship Majorettes Sport was designed for the junior age group with baton tools, shows and shows. At the beginning of the competition day, Mrs. Anita Pariani, Italy gave her greetings. Ms. Pariani arrived to check the level and course of the championship so far without a trip, but as a delegate of two other organizations, Switzerland and Malta. Malta’s sports organization has applied for IFMS membership.

In the medal ceremony, in addition to the finalists of the day was awarded the club Sašetky Hlohovec, was awarded a prize for the development of majorette sport. They won this award for the promotion of the baton flag discipline in the combined discipline of seniors with a wand. Their performance could make the discipline so far less occupied even more visible in the live broadcast of CT Sport.

After demanding preparations and installations, started on Tuesday, 20.8. the first day of the 7th World Championship Majorettes Sport, in the Královka sports hall. After the official opening ceremony, the program included small formations (solo, duo-trio, mini) of senior age groups. After the afternoon break, the band’s stage performances continued. This competition block could be watched live on CT sport. The entire competition also has its live broadcast, available through www.ifms-majorettes.com.

How this majorette sport succeeds in the audience this year will show viewership and reviews. The last year were positive… 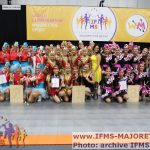 The premiere of the I. World Majorettes Cup is history. This cup competition, included in the calendar of international events, the participation of competitors for the first time exceeded expectations. Majorettes in the same hall as the World Championship racer showed their competition performances. The competition knows its first finalists and the future will show how much motivation it was to introduce this “preparatory” competition into the event calendar and whether it would retain the interest of small wand formations and solo fringe formations. 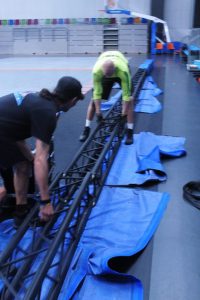 Already at 7am was in sport hall Královka busy, the equipment was establishing, installed, everything was prepared for registration. The
hall had to be ready, it opened at 14:00 and was open to competitors and spectators. This time also experienced clubs, Daisy Ostrava and Charlie Hradec nad Moravicí joined the preparations.

Read More
5:57 pm - August 20, 2019 Posted by admin 0 Comments
We use cookies to ensure that we give you the best experience on our website. If you continue to use this site we will assume that you are happy with it.Ok