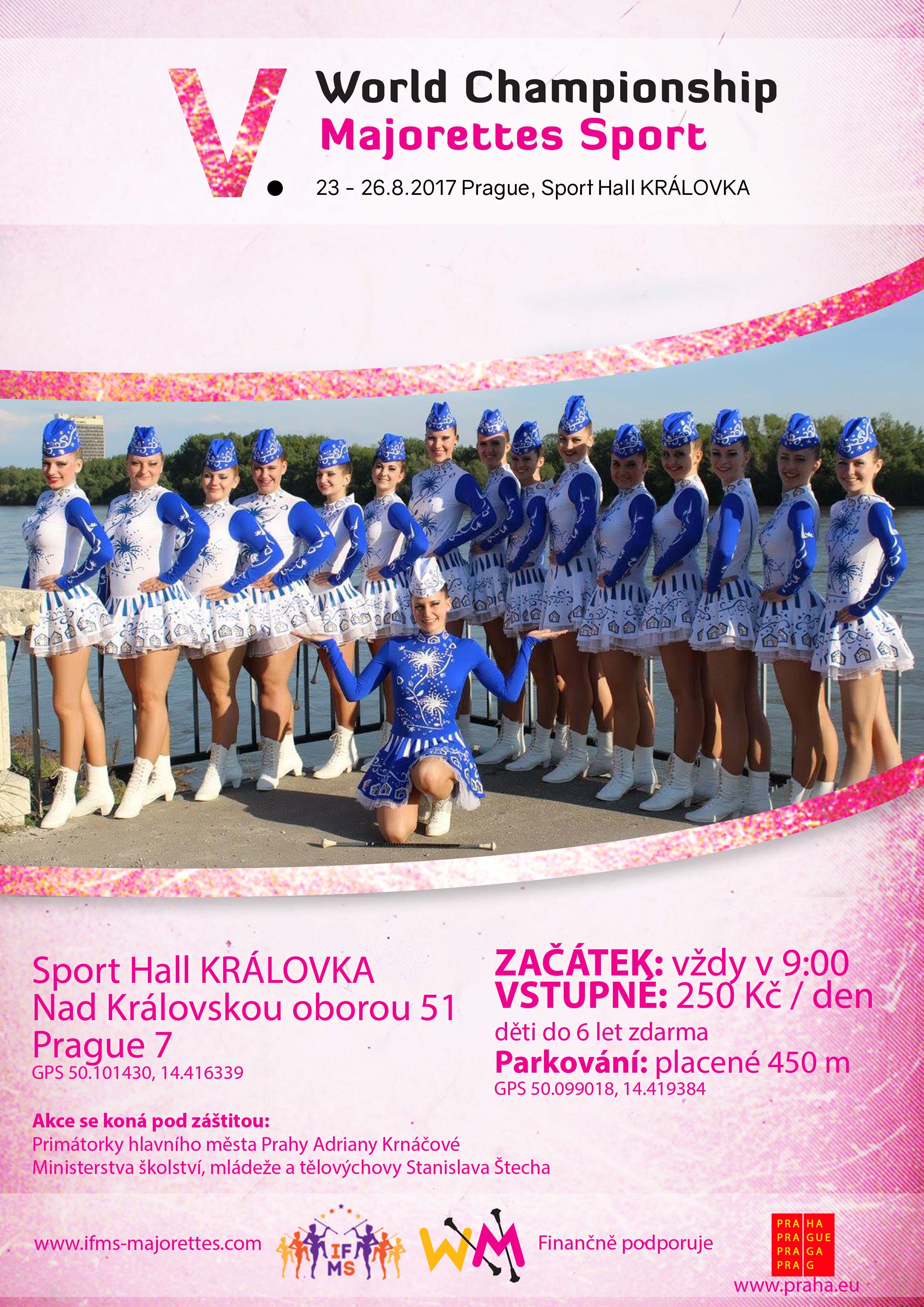 The Královka Sports Hall, Nad Královskou oborou, Prague – Bubeneč, will be on August 23-26, 2017 for majorettes sport. The start of each competition day is always at 09:00 h. The competition is primarily for girls under 26, but we will also have a look at 14 groups of age category above 27. At the start, there will be more

than 3,000 majorettes in twenty disciplines and four age categories. To the majorettes sport, which originated in the Czech Republic in 2001, preceded several years of development. In 1994 in Hranice (Moravia) took place a competition parade of majorettes groups and laid the foundation for the creation of the first competition rules in this area. The interest of majorettes in participating in the competition over the course of three years has reached such a boom that groups have been reported to Hranice even from abroad, and qualifying rounds have been introduced in the Czech Republic. Hranice left the final for itself. The Majorettes Movement, the most widespread in Central Europe, have long been balancing between culture and sport. Gradually, however, the Majorettes were led to the sports halls. Increased performance has increased the demands on competition areas. Majorettes for showing more and more demanding competition sets were not enough outdoor areas with different surfaces, often uneven, depending on the weather or provisional measure including imperfect sound system. According to Mr. Aleš Svoboda, who has been following the development for several years (in Hořice, the contests have been holding for 16 years), majorettes sport is a graduate sport, not only in the Czech Republic. The Czech representation in Prague is the most represented and the performances of the charges have been amazing the majorettes world not only with its quality but also with its quantity. This prime is undoubtedly the result of the leadership of the Czech Championship in majorettes sport, which educates the elite of majotrettes in the Czech Republic. By introducing the two performance classes A and B, the advancing competitions, where talents are still open to higher and international competitions, and capable representatives are by this way motivated. The original march step has been replacing by elements of dance sport, gymnastics, ballet training and a well-composed choreography are necessary, and everything is made harder by the use of tools, baton and pom-pom are most used, flags are now on the increase, and the combination of tools is gaining popularity. Other attributes of majorettes are colorful costumes, hairstyles, makeup. Everything is coming to Prague to compare with the other majorettes clubs from Poland, Slovakia, Russia, Kazakhstan, Kyrgyzstan, Italy, Bulgaria, Romania, Croatia, Madagascar, and yet from other countries, if they handle visa, finance and other necessities in time for participating in such top-level competition.

All four of the competition days will be possible to watch via the Internet by so called live broadcast (on-line stream), available at www.ifms-majorettes.com as well as on a record broadcast on CT (Czech Television) on 30.08.2017 in events in the region.

The championship is held under the auspices of the Ministry of Education, Youth and Sports and the Prague City Hall, which sponsored the competition.